Vertical Logic challenged thinkspace with nothing less than to help create a content hub and community that enables users to create, share and link interactive stories to form a global content network. Not only did we accept the challenge but we partnered up to help launch an enterprise SaaS version for marketers (cellmobs) And a consumer brand (storytumble). Together, we are building the next generation social content publishing platform with a complete set of engagement tools that connect content, interactions and location like never before, across all devices. We are pretty proud of it. Ask us if your organization would like to be part of our beta roll-out. 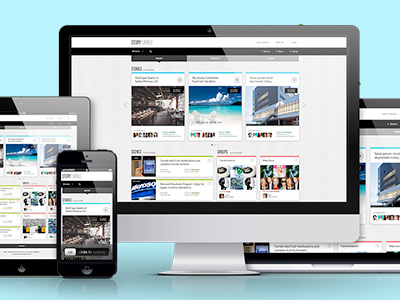 When Vertical Logic approached thinkspace after 2 years of intensive prototype engineering, the application’s feature set had grown as deep as its vision was bold. Multiple groundbreaking authoring, publishing, collaboration and content managing concepts and tools had evolved without user input or validation. User tasks had been stacked upon each other, navigation had become cumbersome, taxonomies were inconsistent, use cases had not been prioritized or segmented, enterprise and consumer features were mixed up in one and the same UI. A clear roadmap how to extend and package this ambitious product seemed dangerously in jeopardy, especially for the mission critical mobile component.

It became immediately clear that a new overall product roadmap strategy was needed that separated enterprise and consumer versions. We decided to first concentrate on the consumer desktop experience to lay the groundwork design for both, enterprise and mobile extensions. By establishing “storytumble” as a consumer brand, we would be able to prioritize the overall feature set and establish familiar mental user models and taxonomies for usability. An intense focus on learnability and affordances was needed to help users with different content types and interaction paradigms of the application. We immediately put the user first.

Within six months, thinkspace was able to deliver a completely new interaction and interface design for both, desktop and mobile, position the enterprise version with costumers for our beta release of which NBC / Universal was one of the first. Storytumble as a consumer brand is expected to launch in October across all screens.